Hidden information is available only to subscribed users. Purchase a subscription to get full access to the service. 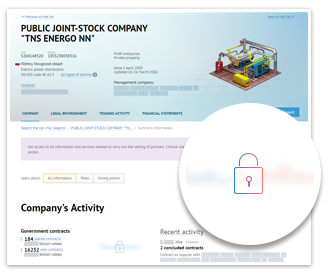 Get access to all information and services needed to carry out the vetting of partners. Choose one of the access plans or get a free 24h access.

Former connections were added to Connections Tree; filtering by licensing body was added to the Licenses section.

Former connections have been added to Connections Tree. They include former addresses and phone numbers, executives and co-owners, former branches and managing companies. Overall, there are 9 new groups of connections reflecting a certain company’s history of changes: